I know I have spoken quite a bit about the changes in my body – but I am a girl so obviously this is a major issue for me. When I first learnt I would be on chemo for about a year, I thought like most people do – weight loss central. This however is not the case with all treatments. Yes, there is that stereotypical look of a chemo patient with no hair who looks like skin and bones. Then there are the people whose drugs react in the total opposite way – like myself. My drugs not only cause me to never have a full feeling (that’s right, I can eat for days and never get the sense I have had enough) – but the steroids have also caused some serious ballooning of my body.

The stomach was an obvious stand out at first because, well, it started standing out. Then I noticed my thighs had a few more bumps than normal. The shirts I would try on at the store went from medium to extra large – and even some of those looked too tight. I went from my skinniest after surgery to my heaviest in a matter of months – and there was really not much I could do about it. I knew the steroids were causing my face to swell – but until I did a side-by-side photo – I did not realize how much. 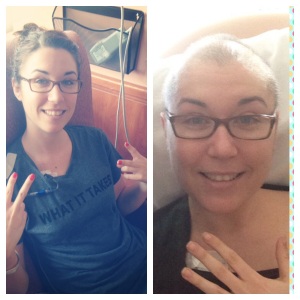 Yes, I understand that gaining weight is much better than losing. I did not expect to be going through this and also look like a supermodel the entire time. As a young female however, our looks are still important to us. Well not even as a young female – I would say as a female in general. Heck, even some men would probably have a tough time with this. The scars I could care less about – but looking in the mirror and seeing back rolls (yep, thats right, I now have back rolls) – was more than shocking to me. If I haven’t said it enough, I am ever so thankful to have such a strong support system. They really come in handy when I am having a “nothing fits me” kind of day. And yes I know at the end of it all, a little weight gain in order to save my life is probably a fair trade off. I think I need to put that into perspective a little more.